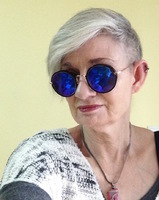 The BBC’s a radio program called Desert Island Discs has been broadcasting since 1942.  Due to copyright laws we cannot recreate their program.  Last Inhabitant on Earth is what we have come up with to duplicate their program.  We have updated the theme due to technological advances.  Instead of a desert island as a backdrop we have substituted Planet Earth.  So our  program is called Sole Survivor on Planet Earth.  We have given our survivor an IPad with solar powered batteries and up to 8 song picks from ITunes. Of course no internet is available since Earth is a virtual desert island.

My sole survivor today is Jenny Wrenn, a lesbian artist and former publisher.  Later we will talk more about the publishing achievements of Clothespin Fever Press which she co-owned with Carolyn Weathers.  I understand that one of your earliest photographs was of a woman named Miss Rose which you turned into an oil painting some 30 years later.  Can you tell me about Miss Rose and how this came about.

I was staying at a YWCA near the San Diego City College I attended.  Miss Rose was 80 if a day.  She dressed in very elegant clothing that perhaps she’d worn in her 20s -- a beautiful hat of velvet that was very frayed at the edges, and the velvet faded.  She would come into the YWCA and chat with the women at the reception desk.  I must have been about 19 at the time.  To me Miss Rose looked straight out of a Dicken’s novel.  I asked the women at the reception desk if they thought I could approach the woman for a few photos.  I took Miss Rose to a rather elegant old fashioned reception room in the building to photograph her.  I must have left her a print at the front desk because sometime later I was given a small envelope with a lightly powdered thank you card.

You didn’t pursue a career in Photography but instead chose a rather unusual line of study.  Tell us about this choice.

I actually was an English major.  I wanted to be a writer.  Yet I loved reading philosophy books and my English teacher at that City College I attended, someone who would become a very intimate friend, encouraged me to change my major to Philosophy since that seemed to be all I wanted to talk about.  I was reading Nietzche’s The Geneaology of Morals, books by Kafka, books about Hume and Parmenides.  Photography, on the other hand, was something I just did, something ingrown.  My father a news photographer who had showed me at age 6 the magic of making a photograph in the darkroom.  Many years later I did make my living as a newsphotographer for the La Jolla Light & Journal.

I think we should move on to the music.  What is your first ITunes pick and why have you chosen it.

My first choice is Rachmaninoff’s Piano Concerto II played by Yuja Wang.  Full of idealism and the romanticism that Rachmaninoff’s music is known for, I would listen to this piece over and over again during my teenage years..  Of course the pianist was someone else, but when I heard Yuja Wang play this I felt it fit my memory exactly.

You left San Diego to finish your Bachelor’s degree in Philosophy, is that correct?

Yes.  I enrolled in Cal State Hayward and my English teacher, Marilyn Hagberg who was also an Art critic for San Diego Magazine went with me to the Bay Area.  It was my association with Marilyn that nurtured the artist in me since I would tag along with her when she visited artists in San Diego and up north--artists like Fred Holle, Sheldon Kirby, architects Ken Kellogg and James Hubbell.

My next piece of music would be the songs of Edith Piaf.  Edith Piaf was raised in a brothel.  She sang and sold flowers on the streets of Paris.  Someone important heard her sing and the rest is history, as they say.

My life didn’t exactly follow that, of course, but I felt very much a kin to her.  I took a job as a cameragirl at the Mark Hopkin’s Hotel (Top of the Mark--a revolving restaurant).  I had no idea what to do with my Philosophy degree, so I tried to get photography jobs.  At the time photography was a male-dominated field and hence when I applied for the darkroom job, I was given the cameragirl position.  I soon left this because I found a more lucrative job working at a massage parlor in Oakland.  The way it happened was I was recruited by a woman I met in a lesbian bar.  I was very reluctant to do this line of work but women do have a way with me.

You were later to use your experiences at the massage parlor for one of your more controversial artwork series, “Prometheus Says Love Your Eagle.”

I believe your third choice of music is for this period of your life?

Yes, The Devils of Loudun by Krzysztof Penderecki.  For those unfamiliar with this opera, the “devils” are nuns who have gone mad from sexual depravity.  I had purchased the album or perhaps someone gave it to me.  In any case, I listened to this music endlessly in my room at the Savoy Hotel.

Then from a lesbian ad I had placed in the New York Review of Books—worded much differently from the Barb ad— I met Evelyn Segal, a research psychologist who taught at SDSU.   She convinced me to leave my illicit profession and move to San Diego with her, which I did. There I enrolled in SDSU to pursue a degree in Art.  So, finally I recognized my true calling.  I met Carroll Parrott Blue (cinematographer and professor at SDSU), perhaps at an art opening, I don’t remember.  But it was she who was responsible for my plane crash series of 1978.  I remember her phoning me.  We talked about the crash that had just happened and she said, “You’re going to photograph it, right?”  I hadn’t intended to until she urged me that it was an historical event, a rare opportunity.  So, I went to the scene and used a press membership card to get in. Even though I had these photographs, I didn’t actually finish the work as an artwork series until a couple of years later when I became a member of Cameravision, an organization of photographers in Los Angeles.

You moved to LA to find a job?

I did.  I met Richard Sullivan through the Cameravision organization.  He was very knowledgable about non silver photographic processes.  And I had studied the history of photography while at SDSU.  So I learned a process from him that led to my artwork “Cuntographs,” “Removing Your Underwear” and “Findings of the Heart.”

You produced a lot during the 80s and you also met Carolyn Weathers with whom you were to establish the publishing company, Clothespin Fever Press.  Do you have another choice of music for this period?

My 4th ITunes Pick is Samuel Barber’s Adagio for Strings.  It is such a beautiful piece of music.  It fits admirably with my meeting Carolyn Weathers.  Our meeting developed into a stellar romance which lasted over 13 years.  She and I started the publishing company, Clothespin Fever Press.  What I deem as Clothespin Fever Press’ greatest achievement was publishing “Loss of the Ground-note: women writing about the death of their mother.”  The book was rejected by many publishers who thought it too depressing for readers.  We felt differently and were proved right by the wonderful reception the book received.  Soon there was a flood of similar books, “Motherless Daughter,” etc by mainstream publishers.

Rocky Horror Picture Show’s “Going Home.”  Carolyn and I moved from LA to San Diego after my parents died.  We lived in the house I inherited from my parents.  This is the music we listened to as we packed for that move. Reflecting on death, I started work on an art series “Funeral Rites” in San Diego.  I became very depressed as more people I knew died.  My aunt my mother’s sister had died earlier in that year, then my father, my mother, an ex lover Lorna Joy, male friend David, another aunt, my father’s sister and my grandmother early the next year.

You commuted up to Los Angeles to work as a librarian in the Carson Library then.  Just to fill in the gap, you had become a librarian after meeting Carolyn and getting a degree in Librarianship at UCLA while managing Clothespin Fever Press and doing artwork such as your artbook, “White Clothespins.”  Eventually you and Carolyn moved back to LA and then you and Carolyn lived apart but have stayed close friends.  You had a dark period from the early 1990s for about ten years when you produced no art and even threw away some pieces.  What made you regain your creative muse?

I was referred to Leah Matson, a therapy psychologist who specializes in working with creative people.  I saw her for about 10 years.  And was able in about 2003 to ease my way back to Art.  You know, the relationship with a therapist is a very singular one, you are distant in that you are not friends and not relations but yet you share intimacies, albeit, a bit one sided.  People are fond of poking jokes at therapists and the practice of therapy and I am sorry about that. For me it was an important experience.

Let’s have another musical choice.

My 6th choice is Gershwin’s “It ain’t necessarily so,” from Porgy and Bess.  I think I could probably fit this piece into several different points in my life.  I have always bucked the prevailing answers to making sense of the world, events and life experiences.  I like to question, to think and challenge what is before me.  I think Art should make people think and question whether what they see is as straight forward as it appears at first to be.

Then a tragedy happened.  You were stabbed multiple times by a home invasion robber.

Yes, and I have an ITunes choice for that event.  My 7th choice is Gorecki’s String Quartet # 2 Op 64 the 2_4 part by Kronos Quartet.  Being no stranger to dealing with difficult events in my past I summed strength by writing and working on some artwork, “Hidden Faces, Forbidden Faces” as part of my recovery.

Now we come to your retirement from public service as a librarian.  Do you have a last choice to end on?

Yes, it would be Don Krim, countertenor, singing Mahler’s musical poem of Rainer Maria Rilke’s poem “Blumenmuskel.”  The voice of a countertenor reminds me of the many female impersonators I’ve known and which makes me feel my place within the lesbian/gay cultural dynamic.  The poem itself talks about a flower and evokes that idea of blooming and moving where ever the wind takes it..  So that is how I like to see my future life going.

WrennArt showcases the work of Jenny Wrenn, who's memoir consists of a life lived as a lesbian, an artist (painting, drawing and photography) as well as a publisher both print and ebooks.